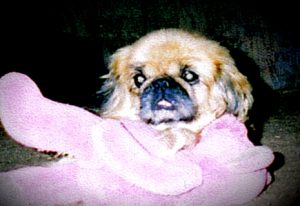 Look into those eyes, and believe the story you are about to read. Someone, in the middle of the night, dumped this angel at a shelter in Southern Ohio. She had a tumor the size of a softball under her right leg, making it very difficult for her to walk. The shelter named her “Little Miss Throw Away”, because she was thrown away like someone’s trash. Due to her condition, she was considered unadoptable, and was to be destroyed. That’s when Pekingese Charitable Foundation stepped in and said that euthanasia was unacceptable, maybe there was hope for her. Although other vets said she was full of cancer, she was rescued from the shelter, transported 8 hours north where Safehaven Foster Home made room for her.

She was renamed HOPE, and was immediately taken to our vet. The tumor had ruptured and was now infected. Our wonderful Dr. Hoover thought that he could help her, and he did. Two days later, the tumor was removed and she began to recover, gaining weight, and getting lots of love. It took over 30 stitches to close the wound, yet she never grumbled or complained. What a trooper.

Hope was the queen of the house. Even the other Pekes seem to give her the respect of a warrior, which she so well deserved. She was our princess, and was cared for as such. Our special time with her was a gift that can never be taken from us.

One of her cutest habits was to use her favorite Teddy Bear as a pillow. She would rest her little head on the bears belly and watch television. Soon she would be asleep, snoring like only a Pekingese can! Hope was a joy to have around, always loving and a happy little dog. She recovered well, her fur grew back, but so did another tumor. Though it was very small, it seemed to be growing rapidly. Hope was scheduled for her spay, so the smaller tumor was removed at the same time. Again, she was a real trooper, recovering quickly and acting like her happy little self once again.

Her favorite treat was a Greenie. She always made us laugh when she had one, licking it like a lollipop for an hour before chewing on it. In April of this year, Hope contracted pneumonia and a heart murmur. Even with the best care of our vet, and around the clock care at home, Hope crossed over on April 15, 2007. For such a tiny little body to go through so much and come back strong, she just couldn’t fight the infection in her lungs no matter how strong the antibiotics were. Hope is the reason we do what we do. She embodies the spirit of Safehaven, giving us a reason to continue, and to give others in her situation a little Hope. We will always remember you.