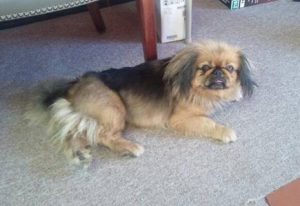 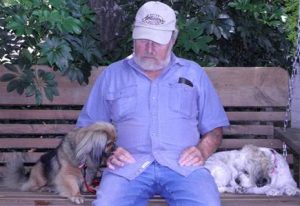 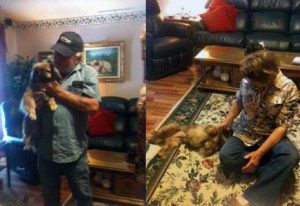 Days ago my friend in Tulsa, Cheryl, (we have been best friends for over thirty five years) wrote and said a little Pekingese bitch had walked in the door of her office following a young woman who had walked in. Cheryl asked the girl if it was her peke and she said No and was going to put her back out again on to a busy main road with very heavy traffic. Cheryl hit the roof and, in her words, let the girl have it for even thinking of putting that peke out there on a busy highway. From the photograph Cheryl sent me she appeared to be in good condition but I found out today that was not the truth, and that she was very thin and covered in fleas. Cheryl kept her and advertised her in the newspaper and put fliers all up and down the busy road. She went home with Cheryl, who breeds and shows Skye Terriers. She was fed twice a day and Cheryl said she has put on a pound in four days.

Today the owner talked with Cheryl and said she did not want the peke and had given her away to her son and she had changed hands a number of times. Evidently, it was about four times she had changed hands. . She said her name is Ginger. Cheryl had named her Mei Ling. Her son has children and they had let her out of the door and she had gone away. Nobody bothered to look for her as they did not want her. They left her to run the street, (they lived right by a four lane highway) and possibly get hit by a car or truck. They did not care, they simply did not want her and so in effect, just dumped her,. Cheryl asked her if she wanted the bitch to be put into Pekingese rescue and the woman said Yes as they absolutely did not want her. The highway has many stores and offices on the front of the road and she could have gone in any one of them or none at all. By a tremendous stroke of good luck she walked into the very office and to the very person she needed to go to. I am not sure it was just good luck. So many stores, so many offices all in a row on each side of the four lane highway and so much traffic, but she walked into Cheryl. I think somebody up there was looking out for this little peke and guided her in to the right person. Cheryl has rid her of fleas and is fattening her up. Meg, Cheryl’s daughter is going over to Tulsa tomorrow and will be bringing little Ginger back to me and I will foster her and find her a good home, What could have been a tragedy for this little peke at the wheels of an eighteen wheeler or car has ended well for her.

Here is an update on the little Peke rescue Ginger. She now has a wonderful new forever home. Her new Mommy and Daddy came to get her on Sunday. The first two pictures were taken at my home within minutes of Ginger meeting them. She ran into the room and rolled over at Jackie, her new Mom’s feet. Jackie immediately got down on the floor and tickled her tummy. The second is of her new Dad holding her.

The third picture I got today from Jackie. Nick is out in the garden with the two rescue dogs….the llasa they found at the river starving and filthy….and Ginger sitting quietly alongside of Nick. They love her dearly already. It gives me a very good feeling to see this picture and how she is settling in,. The had just lost their beloved fifteen year old Peke and Ginger was abandoned by people who did not want her. They all needed each other.